Water supply in Pushkar is maintained by Public Health and Engineering Department (PHED) of the Government of Rajasthan. They look after all the commercial and domestic water supply and sanitation in the state. This department is responsible for laying down fresh sewerage lines for supplying water to each and every part of the state. Water is collected from various sources at the sewerage treatment plants where it is chemically treated before supplying it to different households by a network of pipelines.

All responsibilities related to preparation of plans, provision of house connections, construction of reservoirs, maintenance and collection of pipelines and user charges and laying transmission and distribution, lines come under the charge of Public Health and Engineering Department of Rajasthan. 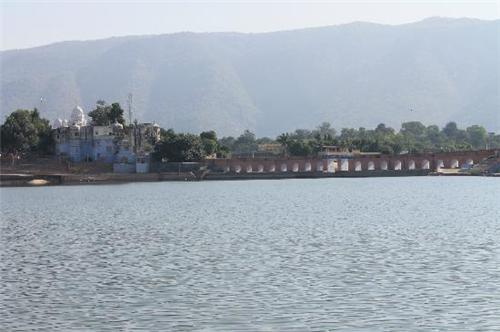 Sources of Water Supply in Pushkar

At present, the water demand of Pushkar is met through sub-surface sources. Currently, there are thirteen Public Health and Engineering Department owned tube wells in the city that are catering to the water demand of Pushkar. Out of these, six tube wells are partly pumping water to the Pushkar Lake and partly pumping water to Pushkar households. While the remaining seven are only catering to the water demand of the city. Research has indicated that currently the city is supplied with around 1.05 MLD of water, for both domestic and non-domestic purposes. The target supply of water in Pushkar is 62 Lpcd and 40 Lpcd for domestic purposes and floating residents respectively. Currently, about 92.7% of the total population in Pushkar is covered under the water supply system of PHED.

Water Treatment in Pushkar
Presently, there is no Water Treatment Facility in Pushkar for treatment or chlorination of water in the city. However, due to the water being supplied from sub-surface sources, the treatment is not considered compulsory. Water from the various tube wells in the city is directly pumped into the distribution system of Pushkar, which is then further circulated to the consumers.

Storage and Pumping of Water in Pushkar
To facilitate equal distribution in the town, Pushkar is divided into three major Water Distribution Zones, which is supplied by Center for Water Research (CWR), around 1.82 Lakh Litres of water. CWR pumps 2 Nos of water of capacity 40 HP and 50 HP to the existing Ground Level Storage Reservoir (GLSR) and Over Head Storage Reservoir (OHSR) respectively. Pushkar consists of one GLSR with a capacity of 0.182 Ml and one OHSR with a capacity of 0.54 Ml. The water distribution system in Pushkar has been recently developed and is still developing. The distribution system is not yet organized and operates on piecemeal bases or as per the demand in the city. Therefore, the water demand of the city is met from the Tube Wells, whereas the remaining is met from the existing GLSR and OHSR.

Water Supply for Pushkar Fair
Currently, there is no permanent and stable water supply system for the annual Pushkar Fair in the city. During the Pushkar Mela, the water supply is arranged through various Public Stand Posts, Tankers and some privately owned tube wells near the tent areas and camps.