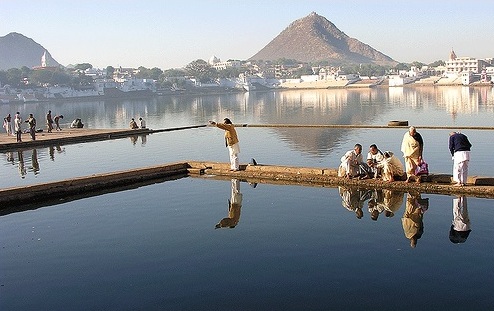 Pushkar Sarovar or Pushkar Lake is located in the Pushkar town in the district of Ajmer in Rajasthan. This lake is considered highly scared by the Hindus. In the Hindu scriptures it is described as "Tirtha-Raj". You can also find mention of the Pushkar Lake in the coins of the 4th century BC.
There are 52 ghats surrounding Pushkar Lake. Many pilgrims throng in huge numbers to take a scared bath. They take bath especially during the time of around Kartik Poornima when the Pushkar Fair is held. According to the popular belief, a dip in the scared water cleanses one’s body and cures all skin diseases. You can find more than 500 temples around the lake precincts.

The Pushkar city as well as the lake can be viewed from top of the hill. The entire region of Pushkar is surrounded by the Aravalli Ranges, from where tourists can have a great panormic view of the entire region.  The mountain range is called Nag Parbat which separates Ajmer city from Pushkar. Under the "Classification of Lakes in India" list, this lake has been classified as the “Sacred Lake”.

There's foot bridge arches across the inlet channel which allows visitors to the parikrama and temples on the ghats. The lake drains at the catchment of the hills of Aravalli that covers a total area of 22 sq kilometers. The water surface area of the lake is 22 hectares. This perennial lake is sourced by the monsoon rainfall. The water depth varies from one season to the other from 8-10 meters. Total storage capacity of the lake is around 1.03 million cubic yards.

Flora and Fauna in Pushkar Lake

The lake is a rich source of aquatihc life and fish, though in the past few years the water depth has shrunk substantially to less than 4.9 ft which has resulted in death of large number of fishes weighing around 5-20 kilos. Lack of oxygen in the water makes it difficult for marine life to survive. It is said that during the reign of the kings, the lake was inhibited by several man eating crocodiles, a menacing factor in the lake that resulted in death of many animals and people.  It was when the British came, they thought of making this lake good for fish rearing that they moved out the crocodiles to nearby reservoirs. 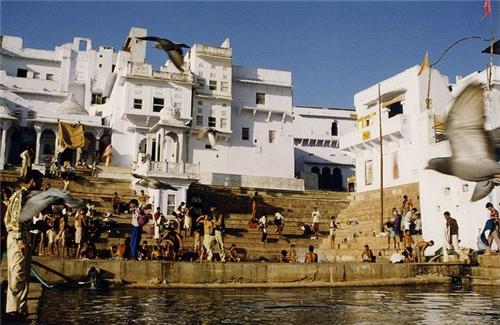 Ghats at the Pushkar Lake

There are numerous cultural attractions to witness which are of national importance. The ghats on the periphery, the Brahma temple at Pushkar and the Pushkar Fair are visited by tourists from all corners of the world. The lake has become a central divine theme for popularity of all monuments seen from the town and fairs held here.

Degradation and Concerns about the Pushkar Lake

The lake fails to meet the National Water Quality Standards because of high concentration of BOD or Biochemical Oxygen Demand. A study on the quality of water was undertaken following the deterioration in quality of the water. The samples of water collected was tested for conductivity, salinity, PH balance, hardness, alkalinity, total dissolved solids, dissolved oxygen, nitrate, nitrite, sodium, sulphate, chemical oxygen demand, biochemical oxygen demand, potassium and total chlorophyll.

Analysis carried out over a period of time revealed that the water was alkaline and the concentrations of conductivity and chloride were very high. Moreover, the dissolved oxygen level was low and the water was hard. In course of the Pushkar Fair, there was a clear relation established between the degree of water pollution and different parameters analyzed. This called for immediate action by the government agencies, who were engaged in looking after the lake.

Deforestation and tourism surrounding the lake has taken a heavy toll and adversely affected the quality of water. The water levels are reducing fast, which is also destroying the fish population. As conservative measures, the government has undertaken de-weeding, de-silting, water treatment, and mass awareness program and a-forestation measures.

Restoration Works in the Pushkar Lake

It was in the first half of the 1990s when the government set up 12 deep tube wells to supply water from the lake. The tube wells were however dysfunctional, which aggravated the problem all the more. Pushkar Lake was included for restoration in the list of five lakes under NLCP or National Lake Conservation Project.  The Union Ministry for Environment and Forests has been offering funds since 2008 for the restoration works, but the situation has not yet improved.

Development plans are under different levels of implementation to cater to the critical issues concerning the lake in Pushkar city. The target is to increase storage capacity of the lake, improve the water quality, prevent encroachment of the peripheries, improve ambience surrounding the lake, introduce revenue generation schemes and prevent encroachment of the lake.

It has been proposed to stop the sewage outfall completely by the diversion and interception of feeder lines. Water treatment plants shall be set up to treat and continuously re-circulate the water. Different conservative measures have been adopted for de-silting and de-weeding water. Measures are being taken for conversation of ghats, converse the soil moisture, stabilize the sand dunes by planting the right plants and putting restrictions on cultivation in the feeder channel beds.

Several institutional measures have been considered additionally to improve the lake, generate mass awareness programs and ensure participation of people in the restoration measures. Awareness is being created to reduce the risk concerning death of the fishes because of inadequate depth of water.