Pushkar, one of the oldest cities of India holds a lot of significance in Hindu mythology. It is considered as the abode of Lord Brahma, the creator one of the three Hindu Gods who formed the great Hindu trilogy. The great number of temples depict various mythological stories about the city. 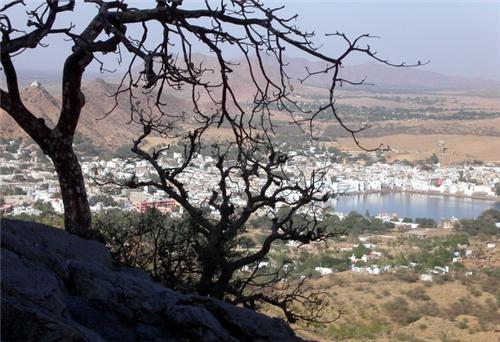 Based on the legends, Brahma was in search of Mahayagna and he came across a suitable place. After long time, he came to know that Vajranash the demon was killing people there, so the Lord intoned mantra on the lotus flower and killed him. In this course, parts of the flower fell into three places which were known as Kanistha Pushkar, Madhya and Jyaistha. Brahma after this, performed yagna to save the place from demons. The consort of Saraswati, Brahma was required to offer Ahuti for Yajna. She was not present at that time so a Gurjar girl, Gayatri was married to Brahma and carried out the yajna. This made Saraswati highly angry and she cursed her husband saying he would be worshiped only in Pushkar.

According to the Mahabharata, when Maharaj Yudhishthara entered the Sind jungles, crossing the small rivers, he had a bath in Pushkara.

According to Vaman Purana, Prahlad visited Pushkarayana on his way to the Holy places. Gurjara Pratihara, Maharaja of Mandore, Nahadarava on the seventh day, restored his tirtha. He cleared the place and restored the lake by making embankment on the river Luni. The old palaces were rebuilt and twelve dharmashalas, ghats on three sides of the lake were restored.

The priests from the Gujar community called the Bhopas are still there in Pushkar temple.

Today Pushkar has become one of the most loved tourist destinations. Those who visit the place, fall in love with the city in course of their stay. The Nag Parbat alienates the city from Ajmer. The mystical allure of the city attracts pilgrims and tourists from different parts of the world.

Comments / Discussion Board - History of Pushkar