Pushkar is one of the oldest cities in India situated in the Ajmer District of Rajasthan. It is located about 14 kilometers northwest of Ajmer at an elevation of 1670 feet. Lying at 26.5° North and 74.55° East, Pushkar is set in a form of a valley surrounded by mountains from three sides and sand dunes from the fourth side. This picturesque town forms a perfect location for annual religious fairs and festivals. 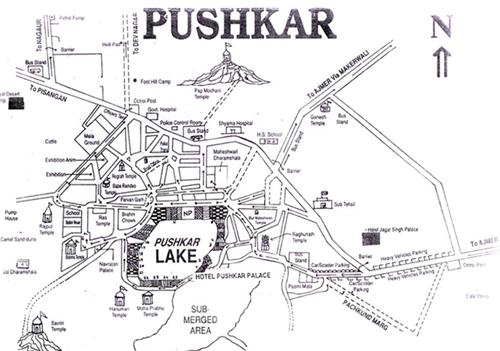 Pushkar is situated amidst the beautiful Aravalli Hills. The mountain range near the city called Nag Parbat, also known as Snake Mountain, serves as the divider between Ajmer and Pushkar. The city is set in a valley surrounded by two parallel mountain ranges of Aravalli Ranges at an elevation of 2133 – 2808 feet running from Southwest to Northeast. The soil in Pushkar is primarily sandy with little water retention capacity. That land use pattern that drains into the Pushkar Lake consists of 30 percent of the area under sand dunes, 30 percent under degraded and barren hills and 40 percent of the land in Pushkar is fit for agricultural use.

The weather of Pushkar is quite extreme with high variations between the seasons. Summers can be very hot during the day and cod during the night. The best time to visit Pushkar is during winters that is, October to March.

Monsoon in Pushkar
Monsoon season in Pushkar is between the months of July and September. Even though the city experiences low rainfall, even during the monsoon months, the humidity level can become very high as much as 90 percent.

Comments / Discussion Board - Geography of Pushkar